There's not going to be a new EclipseFP release at the end of April, I'm not going to keep the monthly release rhythm I had over the past couple of months. In fact, I have a few simple things I could have done that warranted a release (thanks tobbebex for all the suggestions), but I had already started the next big step, so I want to finish what I'm on before moving to other things.
The goal now is to have a database of usages over all projects in the workspace, so you can see where each module is imported, where each function is used, and then potentially do things like workspace-wide renames and such.
The way it's implemented at the moment:
- on the buildwrapper side, I use the GHC API to load all the modules for a given cabal component in a project, and extract usage information from the RenamedSource.
- the usage information is serialized as JSON to a file in the buildwrapper temporary folder
- these files will be read by EclipseFP after it's called buildwrapper generateUsage call
- the information will then be stored in a sqlite database stored in the workspace plugin folder.

So it will use sqlite as scion-browser does, but on the Eclipse side for performance reasons.

Most of the Haskell side of things is done, and I've started the Eclipse side. So far, this has allowed me the humble but useful "open a module" dialog, similar to "Open Type" in the JDT: it lists all the Haskell modules defined in the workspace and let you select one or several for opening the corresponding file in the editor. Selecting a module in the list shows in which project the file belongs. Wildcards are supported of course. 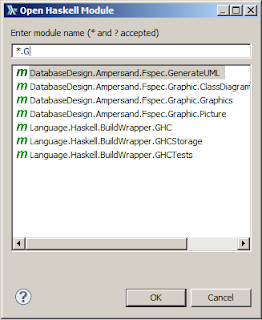 Hopefully all of this will prove useful.

Happy Haskell Hacking!
Posted by JP Moresmau at 8:32 AM No comments: