I seem to have a bit more free time these days to work on EclipseFP, so I was thinking about what we should try to add in the next major release. In no particular order:


Let me know if you have some great idea that's not on the list, or if any of these are of special interest to you. I know there some other requests that people have made that I haven't implemented yet, so you can also check the issue list and comment on those you'd like to see treated with higher priority.
If you feel the urge to fork the github repository and start working on something, please don't refrain, I'll be happy to get more contributors!

Posted by JP Moresmau at 4:20 PM 4 comments: Links to this post

Coming in EclipseFP 2.5.5, the cabal editor lets you specify what policy you want to use in respect to versin bounds when adding a dependency to a package, instead of just referencing the package without any constraints, or having to type them by hand: 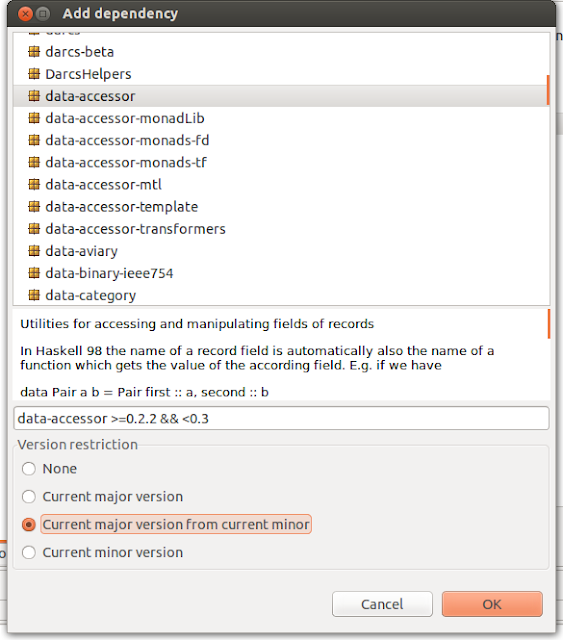 You have four options:


The text field shows you the actual values that get generated. This field is now read-only since you can first select a package then change the version restriction options. If you want to enter manually the version bounds, you can still do that on the main page where all the current dependencies are listed.

I hope it will let you conform to the Package Versioning Policy and provide reasonable dependency bounds on your libraries.

No date on the 2.5.5 release yet, there's a couple of things I'd like to do first. The Github version should be usable if any of you want to live on the edge (and perform some valuable testing!).

Posted by JP Moresmau at 10:27 PM No comments: Links to this post