The title is sensationalist. All I've done is tweak a bit how we interface between GHCi and the Eclipse debugging framework. What that allows now (in the development version of EclipseFP) is to have expressions (in the Debug Expressions View) evaluated even if you're not stopped at a breakpoint.
So when you work directly in GHCi, you type in expressions to check the results. But when you change some code and hit :reload, your bindings are lost, you need to retype the expressions. EclipseFP does all that for you.

I've posted a video of a simple session in action on YouTube. It's my first video ever! It just shows a trivial arithmetic function being changed and how the result refreshes as soon as you select back the running program in the Debug view. Best viewed large...

Posted by JP Moresmau at 10:29 PM 3 comments: Links to this post

I decided to release a new version of EclipseFP, 2.3.2. There also new versions of buildwrapper (0.6.2) and scion-browser (0.2.11) on hackage, even though they are not strictly required (but they compile under GHC 7.6).
This new minor releases offers some bug fixes and performance improvements. Hopefully the installation has been made easier (it is possible to install all helper executables from one place). The debugging mode has also been enhanced, with GHCi history support and the possibility to select expressions in the source code and add them to the Expressions view or see their current value in a popup (when stopped at a breakpoint).

As usual, just point your Eclipse to http://eclipsefp.sf.net/updates. The full release notes can be found here.

Thanks to all the users, bug reporters and contributors!

Posted by JP Moresmau at 5:08 PM No comments: Links to this post

OpenAlchemist: the start of an AI in Haskell

Lately I've been quite addicted to OpenAlchemist, a Tetris-like game developed by I think a couple of French developers (cocorico!). The code is in C++, there doesn't seem to be a clear API to integrate with the engine, the forums are closed, but I still wanted to write an AI for the game..

So I've written a little something in Haskell and posted it on Github just in case it's of interest to somebody. I basically use the Win32 API to capture the game window and save it as a BMP, then I use the bmp library to open the BMP, and some home grown image recognition to see which shapes are displayed on the screen. Then comes the "easy" part, checking the possible combinations and seeing which one yields the higher score. So far the AI hasn't beaten my own high score, so there's still work to do!

I'm still struggling with shape recognition sometimes, so this is an area that needs an improvement. I probably need to read up a bit on the proper algorithms that people have found to do this kind of things instead of just writing my own, but hey, one needs to have fun!
Posted by JP Moresmau at 3:30 PM 1 comment: Links to this post

I've been asked if the EclipseFP debugger could provide stack traces. Links to great presentations about the subject were even presented! Simon Marlow's explanation of what can be done now regarding stack traces was great, but doesn't solve my problem: the debugging session in EclipseFP uses the GHCi debugger, basically sending GHCi commands and parsing the ouput, and Simon's new solutions require -prof flags, and hence don't work with GHCi.
For the time being I've done something that is not stack traces, but can provide some context when debugging, using the GHCi history. If when invoking a function in GHCi function, you start with :trace, then the :hist command gives you the last 50 evaluation steps. EclipseFP now calls :hist automatically on reaching a breakpoint and parses its output. It represents them as stack frames in the debug view, even that's not what they are. This way, clicking on them opens and select the relevant code, so hopefully you can get an idea of where you are and what you code is doing.
A screenshot showing the history on the program given as an example in the debugging article of the Monad Reader (PDF warning!): 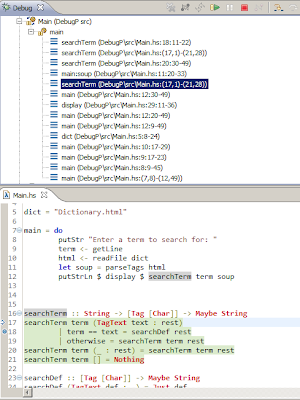 This will be part of the EclipseFP 2.3.2 release, hopefully this will be helpful to some.
Posted by JP Moresmau at 6:29 PM No comments: Links to this post

Warning! This is not a technical post about EclipseFP or Haskell in particular, but rather some ramblings...

I’m a software programmer. I work mainly from home. I love it. But I’m aware that very few job postings offer the possibility to work remotely, and that if ever I have or want to change jobs, I will need to move somewhere else, where there’s a decent job market, to be able to work.
Now, I suppose it’s easy for me to work from home, for a variety of reasons:


A few of these reasons are specific to me and my situation, but it seems that generally speaking, a few factors could be seen as promoting working from home:


Of course I’m well aware of all the objections a company can raise.


What more can we do to encourage companies to offer home working? Do we just need higher fuel prices to that employees cannot afford commuting? I hope we can be a bit more proactive. Can more technology help? Do we need more tools?


Or do we have the tools and just need to get used to them?  Or is it just a shift in employee-employer relationship that may happen slowly and can’t be rushed? In this case, we need to push more stories like 37Signals, about how successful software companies are hiring remote employees and loving it!
Posted by JP Moresmau at 5:07 PM 3 comments: Links to this post